CARFAX had an existing used car marketplace that wasn’t gaining traction in the market. After making a key hire to reinvigorate their efforts, DesignMap was approached to kickstart updates to the UX.

In my role as junior designer, I was the sole consistent resource throughout the project. I was responsible for translating rough designs from my design director into fully fleshed out concepts. I produced the vast majority of mockups and designs for the project.

Our team in worked in two phases. In Phase 1 we worked to rapidly update the core experience of finding a used car. In Phase 2 we broadened our scope, building out the rest of the experience.

Phase 1 had a short two month timeline. We were tasked with rapidly improving the current experience while proving our value to the executive team. We jumped in with an intense 2 day onsite work session in which the team whiteboarded an initial vision for the application. 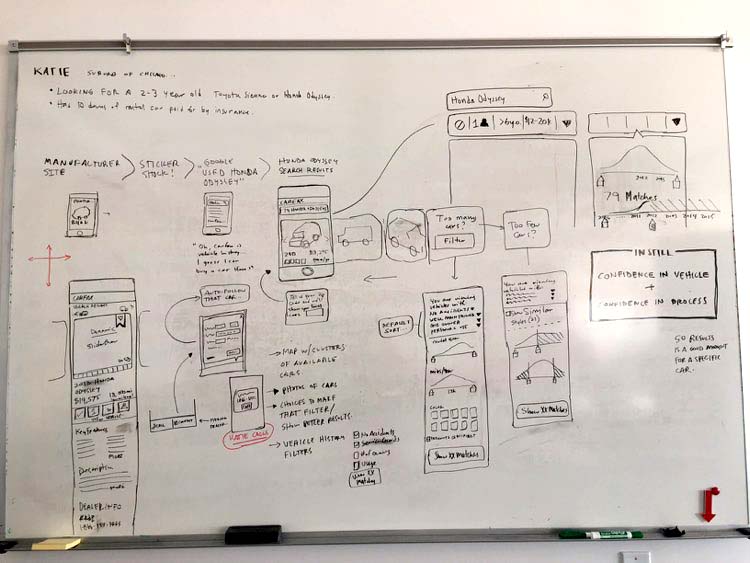 One of several detailed whiteboard sketches we created in collaboration with our client’s team.

There was 6 weeks to fully redesign the core search experience and demonstrate that our improvements resonated with potential car buyers. After crafting initial mockups, we dove into 3 weeks of user testing twice a week with two user researchers. I worked to rapidly update our prototypes in between and sent out our findings to executives, and didn’t sleep much in the process. 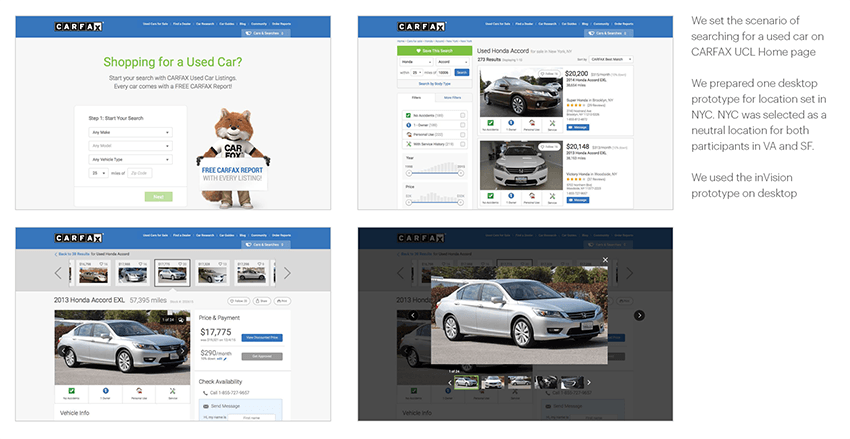 An excerpt of a deck prepared for executives describing our process.

A sample of mobile mockups and findings from a round of user testing.

Our user testing sessions were also recorded. And by showing high-level project stakeholders how people would use the new app and by letting them see rapid improvements to the product, we secured a Phase 2.

We now had several months to flesh out the experience. Working with my design director, I was able to flesh out other features and add visual design in Phase 2. I spent a good chunk of time designing an interface for comparing several cars side by side. I also created the process for searching and finding a dealer, redesigned their email notifications to be modular and more personal, and made sure our interface would scale across several breakpoints. 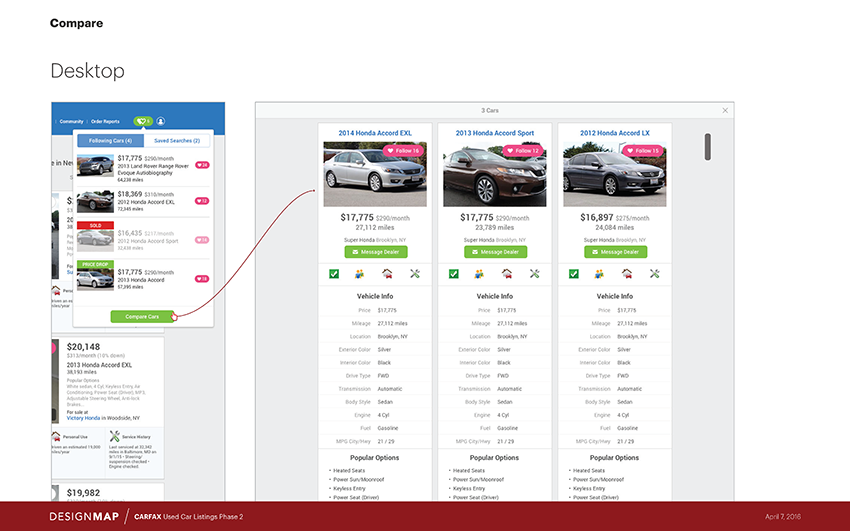 A sample of a presentation I created describing the compare cars functionality. 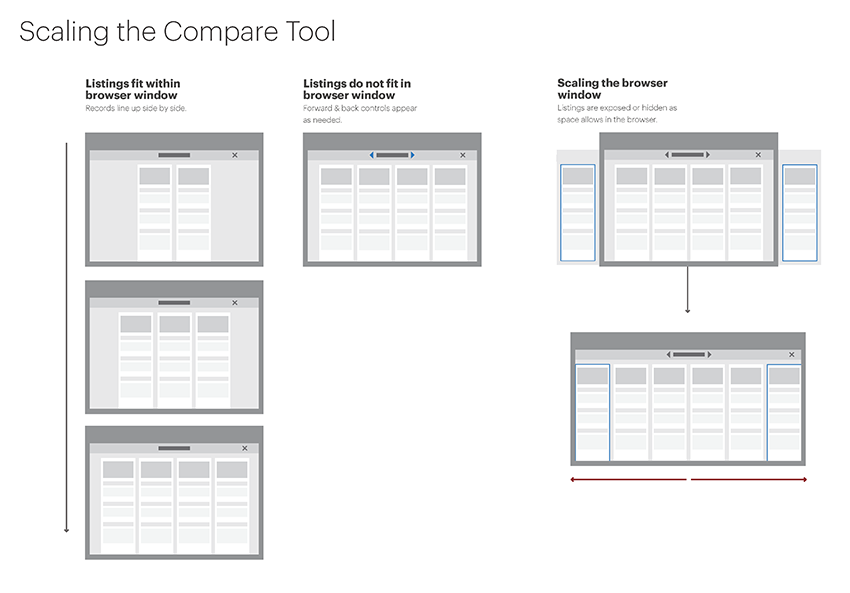 A diagram I created to describe behavior to developers. 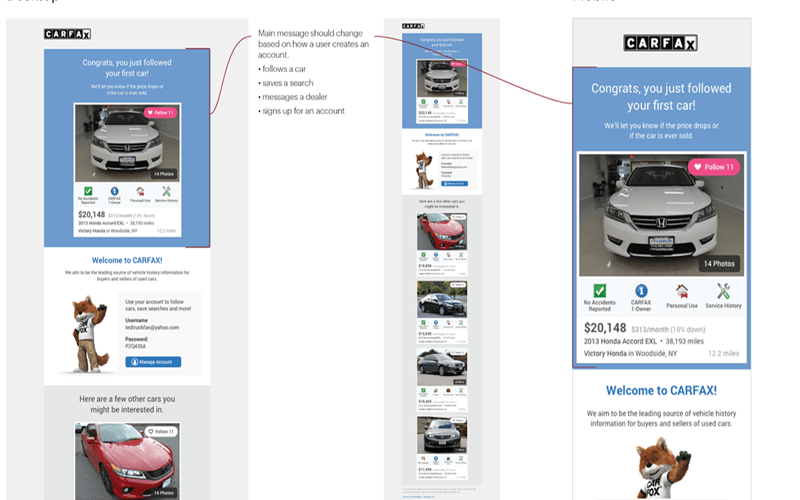 A sample from a deck featuring an email notification design and desired behavior. 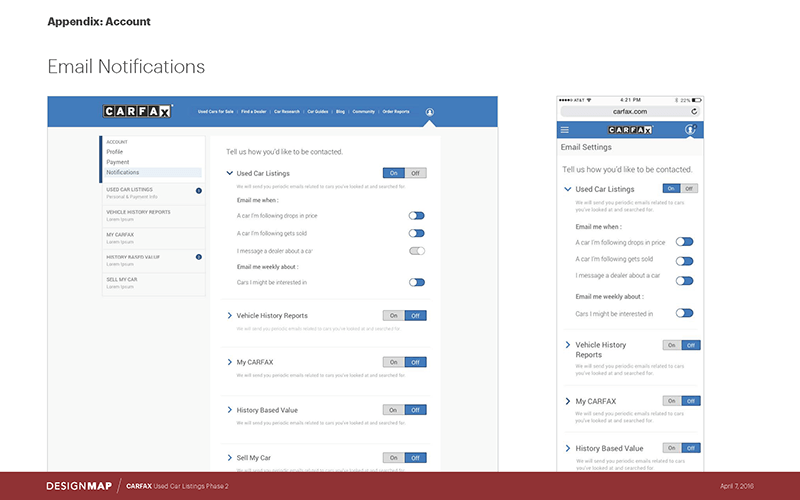 I designed a settings page so users could manage their email preferences.

Fully illustrating how a dropdown scales as a user “follows” a car. 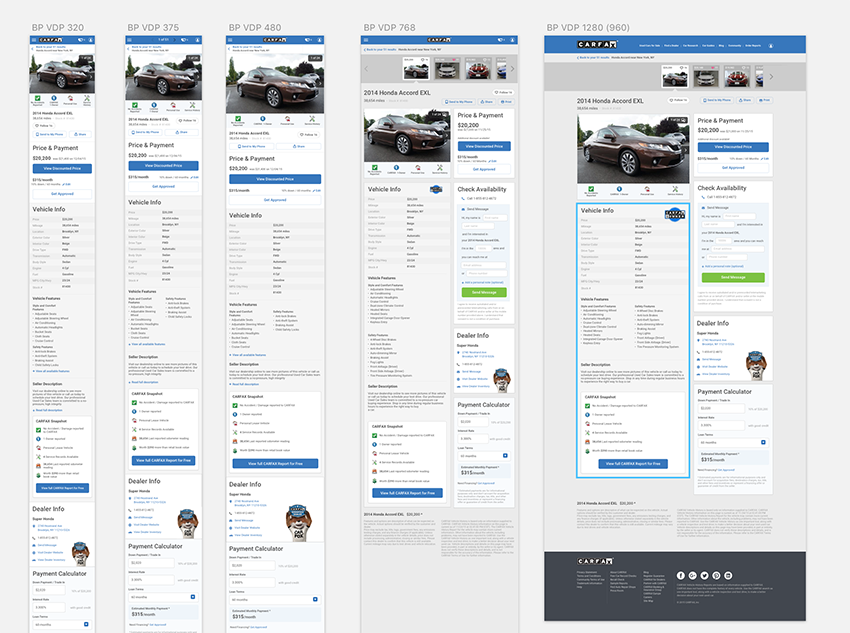 Designs for the Vehicle Detail Page across several breakpoints. 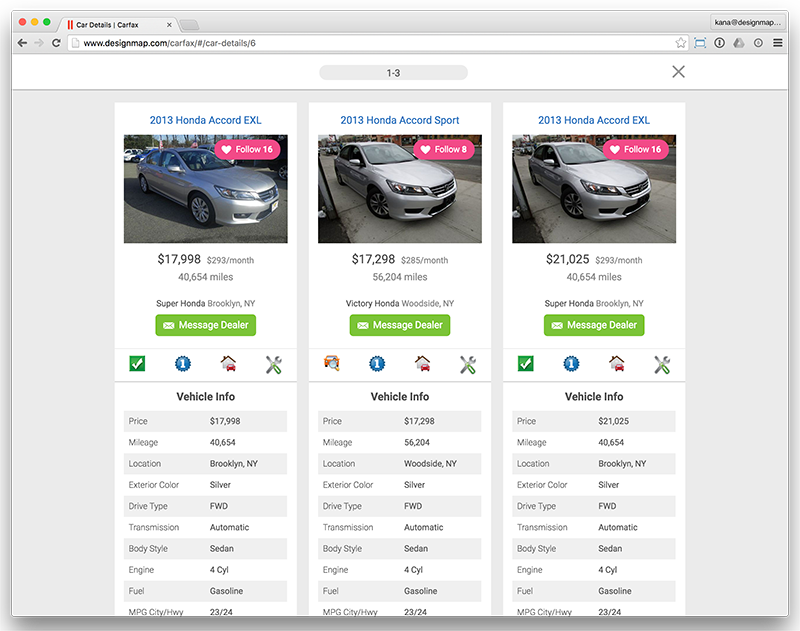 A screenshot from the live prototype.

In the end our team succeeded in creating an experience that helped customers find a used car and furthered CARFAX’s goal of being seen as a trusted source of information. It was gratifying to be able to design a product from scratch and have such robust user testing to validate my work.

I was pleasantly surprised when my designs were prominently featured in a national ad campaign.